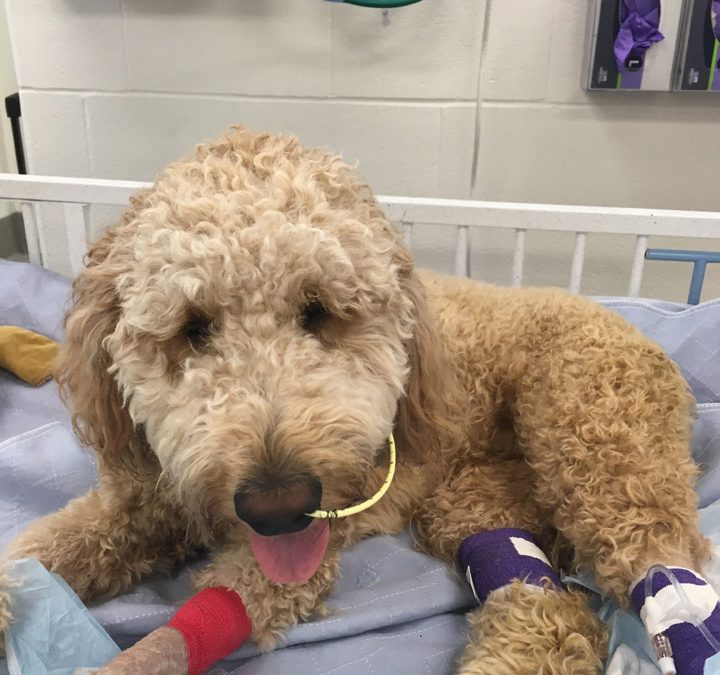 It all started with orange diarrhea. The following day, Rosie became lethargic, which was unusual for a 2-year-old Goldendoodle. She presented to her local veterinarian, who diagnosed her with immune-mediated hemolytic anemia (IMHA), which is a condition where the body attacks its own red blood cells, leading to anemia. The hemoglobin from the red blood cells is converted into bilirubin, which causes jaundice (yellow skin and eyes, and in Rosie’s case, orange diarrhea). She was started on prednisone to suppress her immune system from attacking her red blood cells, but her signs progressed. She presented to the Ohio State University Emergency Service for further care. The following day, her anemia was even worse, and she received a blood transfusion. Because of the progression and seriousness of her disease, she was started on therapeutic plasma exchange (TPE).
TPE separates the plasma (water component of blood) from the red blood cells. The antibodies that are attacking the red blood cells are in the plasma, which are removed and discarded. Immediately after her first treatment, Rosie’s red blood cells were no longer agglutinating (sticking to each other). Rosie received a second TPE treatment the following day to remove additional antibodies that redistribute into the blood, and a 3rd treatment 2 days after that. In general, 3 treatments over 5-7 days is sufficient to remove enough antibodies in the body to allow the medications to suppress the immune system and prevent additional antibody formation. Rosie did need an additional blood transfusion between her 2nd and 3rd TPE treatments.
By the morning after her 3rd TPE treatment, she ate all her breakfast! Unfortunately, she required another blood transfusion the day following her last treatment. Rosie also developed a fever due to a catheter infection in her back leg, likely because her immune system was suppressed, increasing her risk of infection. The catheter infection kept her in the hospital for 4 more days and she was finally discharged from the hospital.
On her first recheck 5 days after discharge, her anemia had not started to improve yet, but by 10 days at home, she was showing amazing improvement and went on to a full recovery. She did gain a bit of weight on the prednisone, but that medication was tapered off after two months, and she was completely off all medications after 6 months.